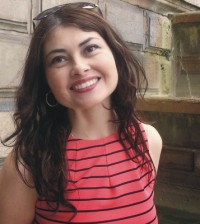 Heidi Ruby Miller uses research for her stories as an excuse to roam the globe. With degrees in Anthropology, Geography, Foreign Languages, and Writing, she knew early that penning fast-paced, exotic adventures would be her life. She’s put her experiences and studies to paper in her far-future AMBASADORA series and into her two new thriller series.

In between trips, Heidi teaches creative writing at Seton Hill University, where she graduated from their renowned Writing Popular Fiction Graduate Program the same month she appeared on Who Wants To Be A Millionaire. AMBASADORA was her thesis novel there, and the multi-award winning writing guide MANY GENRES, ONE CRAFT, which she co-edited with Michael A. Arnzen, is based on the Seton Hill program and was named #5 in The Writer magazine’s Ten Most Terrific Writing Books of 2011.

She has had various fiction and non-fiction publications, as well as various jobs, including contract archaeologist, foreign currency exchanger at Walt Disney World, foreign language teacher, and educational marketing director for Frank Lloyd Wright’s House on Kentuck Knob. In 2012, Heidi created the Dog Star Books science fiction imprint for Raw Dog Screaming Press and was the managing editor for the line for three years. Recently she was the Director of Professional Writing Relations for the Pennsylvania Literary Festival, an event she co-founded in 2014.

Her formal memberships include The Authors Guild, International Thriller Writers, Pennwriters, Littsburgh, and Science Fiction Poetry Association. She is fond of high-heeled shoes, action movies, chocolate, and tea of any sort. Heidi lives near Pittsburgh with her award-winning writer husband, Jason Jack Miller, and a sweet little kitty.