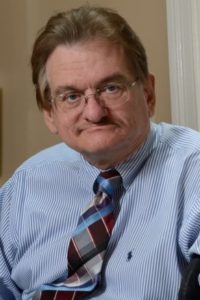 W. Ron Adams grew up in several small towns in Western Kentucky where he was one of the state’s top high school basketball players from 1972-75. After a coal mining accident ended his basketball ambitions, he attended Murray State University, graduating with a degree in business administration. Later, he earned a JD/MBA from the Salmon P. Chase College of Law at Northern Kentucky University. He resides with his wife and several dogs in Northern Kentucky, where he practices family and bankruptcy law.