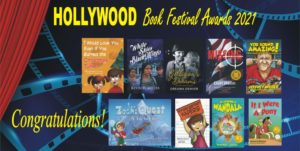 Author Christopher St. John’s War Bunny (Harvest Oak Press) is the Grand Prize Winner and is the story of Anastasia, a rabbit who bravely confronts her area’s killers, launching a war between prey and predator in a post-apocalyptic world. Compared to Watership Down by reviewers, the book raises intriguing questions about friendship, honor, religion and the establishment. The book is the first in a series by St. John.

The author wins $1500 as his grand prize and will be honored at a ceremony in Hollywood later this fall.