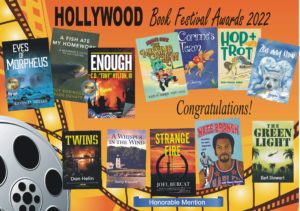 Our grand prize for the 2022 Hollywood Book Festival Author of the Year is a $1,500 appearance fee for our gala awards ceremony in Hollywood.

Based in the capital of show business, the Hollywood Book Festival aims to spotlight literature worthy of further consideration by the talent-hungry pipeline of the entertainment industry.

A panel of judges determined the winners based on the story-telling ability of the author and the potential of the work to be translated into other forms of media.

HONORABLE MENTIONS — A Whisper in the Wind – Barry Kienzle

The story of a remarkably intelligent bird and his battles with the government and dangerous raptors is the grand prize winner of the 2022 Hollywood Book Festival.

Author Lawrence Lieber’s Chirps is the first unpublished novel to win top honors in the festival’s 16-year history. The book takes the reader on an amazing journey from the Australian outback to the skies of New York City, as an unusually marked budgerigar comments on the story from his perspective and provides social commentary.

Lieber’s captivating work wins him a cash prize of $1,500. He will be honored later this year at a ceremony in Hollywood.