NEW ENGLAND_ The 2022 New England Book Festival has named a business memoir on the dominant media company in sports as seen through the eyes of its founder as the winner of its annual competition honoring the best of the holiday season.

Authors  Bill Rasmussen and Donald T. Phillips ESPN: One Giant Leap for Fankind (Headline Books) take home the top honors. The book offers a walk through sports history with the man who changed it, combining his personal journey with what was happening at the time in our country. ESPN was the first 24-hour, 7-days-a-week sports television network. Rasmussen, called “The Father of Cable Sports” by USA Today, he tells of the struggles, triumphs and innovations that made ESPN a force in sports journalism. He is aided in telling the story by Phillips, who has collaborated on books with Cal Ripken, Phil Mickelson and other sports greats. 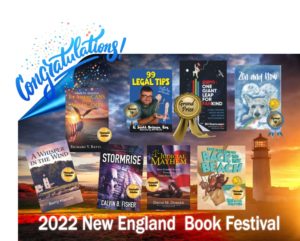 Other Headline Books winners in the competition:

CHILDREN’S BOOKS: Honorable Mention – Back to the Beach – Dreama Denver

HONORABLE MENTION: Made in America by AmeriCANS, not AmeriCANTS – Richard V. Battle