NOTE to editors and news directors: Contact information is below with additional material available at the Dropbox link. The author and Carolyn Galloway welcome the opportunity to do interviews and appearances. Review and promo copies available upon request.

Azalea Bluff is a new thriller with science-fiction twists that couldn’t be timelier, and it’s especially meaningful to the family of Ed Galloway, the Charlotte-area radio personality who died unexpectedly of a heart attack at age 68 in 2019.

Galloway earned his nickname of “the man of a thousand voices” during decades as a broadcaster whose work included syndicated programs, voiceover work and narration for shows on the Discovery Channel among others. You can still hear his voice on commercials throughout the Southeast.

“Ed also was a big UFO buff, and he was ahead of his time. News coverage about UFOs has really exploded lately, and the government can’t explain many anomalies,” said Holden Beach author Dennis Hetzel, who transformed “Incident in Mint Hill,” an audio drama that Galloway created, into Azalea Bluff, his third novel for Headline Books.

Azalea Bluff explores mysteries surrounding the disappearance of Olivia Claven, a struggling young journalist, when she investigates the crash of an object on her high-school football field in a Brunswick County beach town. The answers, driven by her father’s relentless and dangerous search for Olivia, might tie to secret research by Nazi scientists during World War II and documented UFO episodes in places like New Mexico and Kecksburg, PA.

The Charlotte-area launch event for Azalea Bluff will be held at one of Galloway’s favorite local establishments: The Hill Bar and Grill, 11232 Lawyers Road, in Mint Hill, from 5-7 p.m. on Sept. 22. Ed Galloway’s wife, Carolyn Galloway, and Hetzel will appear to speak and sign books. Admission is free.

“I met Ed at the Southern Christmas Show in Charlotte a few years ago where Headline Books had a booth,” said Hetzel, a former newspaper editor and publisher. “He told me he always wanted to find an author who could turn his short story into a full-blown novel.”

The book was a significant departure from Hetzel’s two earlier efforts for Headline Books, Killing the Curse and Season of Lies, that focused on the prices paid to succeed at the highest levels of sports and politics.

“I’ve always loved good science fiction, so I thought this might be fun,” Hetzel said. “Then, as I did my own research, I learned Ed was right that a lot of questions still need answering. I think readers will be fascinated by some of these well-documented incidents.”

The original audio production, done in the style of a 1930s radio drama,  was set in Galloway’s hometown of Mint Hill, a Charlotte suburb. “Ed rolled right with me when I made several changes to the plot, characters and setting,” Hetzel added. “But we always preserved the bones of his story.”

After Galloway’s passing, Carolyn Galloway, a well-known interior designer in the Charlotte area, told Hetzel that she wanted the project to continue. “The project meant so much to him,” she said. “We’re very proud of this book, and I think it’s a great tribute to Ed and his legacy. He touched so many lives.”

Azalea Bluff is available at Amazon.com and your favorite local and online bookstores. Formats include trade paperback and e-book with an audiobook coming soon. Signed copies and bulk orders are available by contacting the publisher directly at cathy@headlinebooks.com or Hetzel at drhetzel@gmail.com and www.dennishetzel.com. 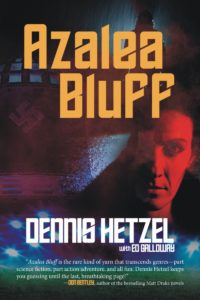 Dennis Hetzel is an author, media consultant and freelance journalist. His latest novel, Azalea Bluff, is a science fiction thriller about the disappearance of a young journalist from a North Carolina beach community. His award-winning thrillers for Headline Books, Season of Lies and Killing the Curse, explored the prices paid to succeed in politics and sports. In earlier lives, he was a reporter, editor, publisher, journalism professor and executive director of the Ohio News Media Association where his lobbying on First Amendment issues gained national recognition. A Chicago native, he lives in Holden Beach, North Carolina, and plays bass guitar for MoSun, an Americana rock band. Learn more at www.dennishetzel.com.

Ed Galloway pursued his love of radio after serving in the U.S. Navy and earning a certification from the Carolina School of Broadcasting. He was a popular broadcaster in his native Charlotte area and then across the country, known as “the man with a thousand voices” for his impersonations and command of his voice. He narrated projects for the Discovery Channel, Bojangles and NASCAR, among others. Ed’s old-time radio drama, “Incident in Mint Hill,” served as the foundation for Azalea Bluff. A heart attack took his life in January 2019 at age 68.