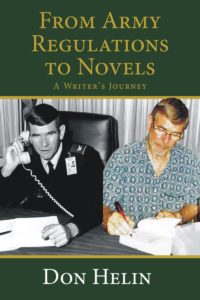 In less time than it takes to run a hundred-yard dash, Don Helin’s life is shattered with the stunning news of an illness—triggering numbness, shock, confusion, and despair.

In a fast-paced memoir that reads more like one of his thriller novels, Helin leads us through his journey while weaving into the narrative of his military life the chaos of Vietnam, Watergate, the Cuban Missile Crisis, and political intrigue in the Pentagon.

Finding himself on the threshold of the five steps of grief, he considers the different roads he might have traveled.  He enters a National Cancer Institute study protocol designed for Vietnam veterans with health issues caused by Agent Orange.  Will the results of this study help the many veterans who suffer from Agent Orange-inflicted diseases?

With the help of his wife and others and his own strength of human spirit, Helin considers changing priorities in his life, which might lead to a different conclusion.

Is it too late to make changes, or must he simply play out the hand he’s been dealt?