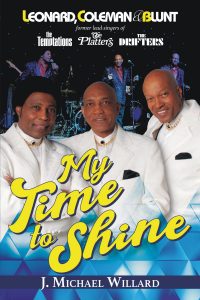 Leonard, Coleman and Blunt have been around the world and back again several times each as the lead singers of three of the most legendary vocal groups of all time: the Temptations, Platters and Drifters. The three Washington, DC natives have a back-story right out of a Hollywood movie; Leonard, Coleman & Blunt grew up singing together in church and on street corners throughout the 1960s before finding fame and fortune separately, then reuniting after 30 years to harmonize together once again.

Glenn Leonard and his sweet tenor voice joined Motown’s legendary Temptations, recording ten hit albums, touring the world, and singing lead on many of their 1970s and 1980’s R&B hits. Joe Coleman joined the Platters for a two-decade stint as the group’s lead singer in addition to gaining a successful career as a songwriter and playwright. Joe Blunt performed and recorded with the Drifters for over a decade in venues all over the world alongside Ben E. King and Johnny Moore, earning a Lifetime Achievement Award from Sony Records.

J. Michael Willard has had a varied career as a newsman, political and policy advisor to US. Senators, senior public relations and advertising counselor, author, publisher, artist and entrepreneur. His primary emphasis today is writing both fiction and non-fiction and representing and raising the profile and enhancing the reputation of promising authors and leading business executives. Over the years, Willard has written 16 books, equally divided between novels and books on marketing and public relations. Willard spent 22 years at the helm of advertising and public relations companies in Eastern Europe and Turkey. He is a former executive vice president of the worldwide PR firm Burson-Marsteller. Willard was director of US Sen. Robert Byrd’s Democratic Leader’s office when Byrd held that position. Willard also served as communications director to then Gov. John D. Rockefeller in his successful Senate bid. Early in his career, Willard was a reporter on various newspapers, including the Orlando Sentinel and the Tampa Times. He is a native of Vidalia, Ga.