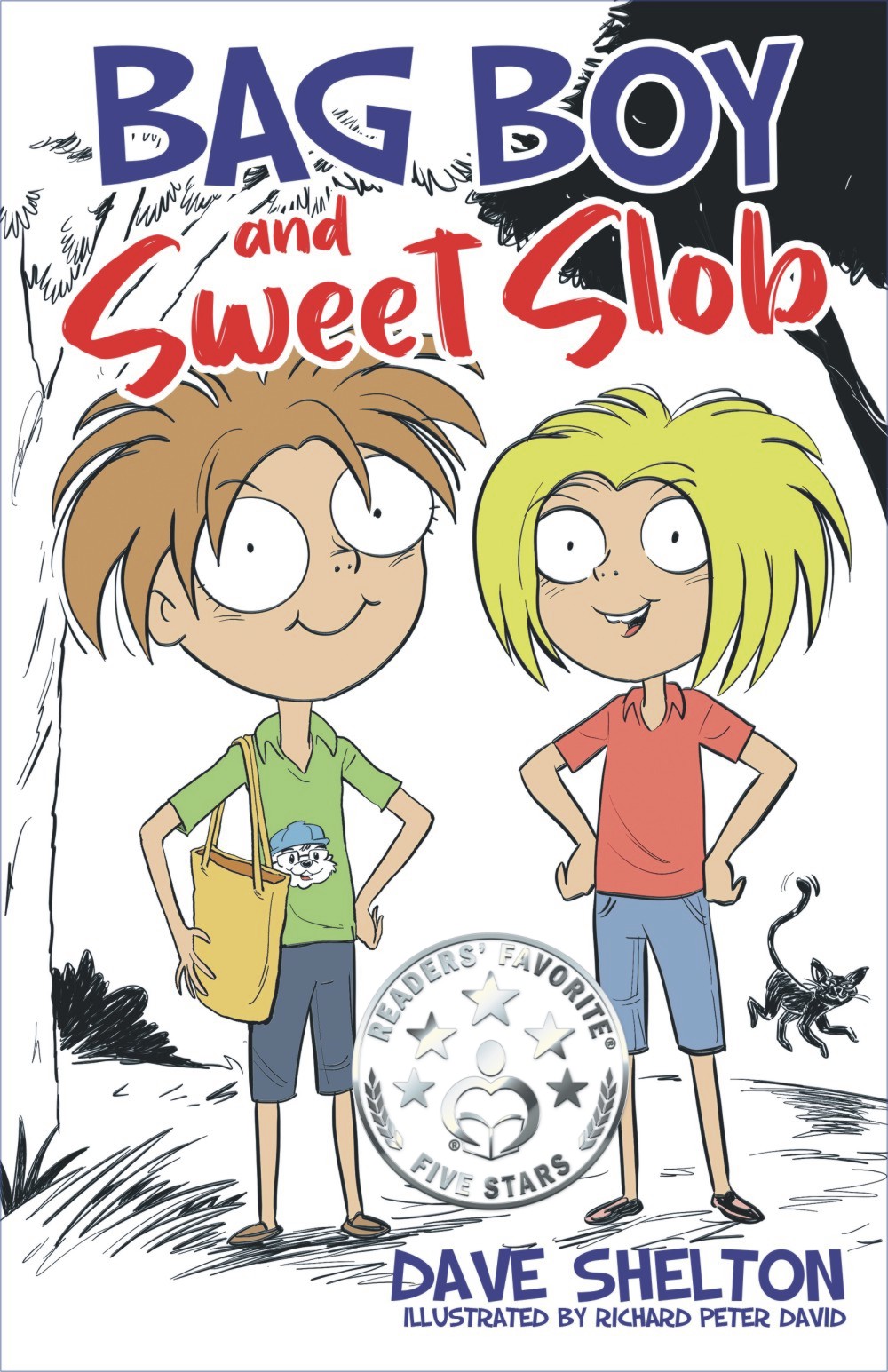 Bag Boy recycles bags of every kind to help others. He meets Sweet Slob, and after seeing her messy room, offers to help. A friendship and small business is born!

"If I had to describe this book in one word it would be 'adorable!' The story is adorably sweet and funny, the characters adorably cute and innocent and the inspiration behind the story is adorably hilarious! I feel honored that I helped to inspire Dave to share his imagination behind our relationship."  —Tami Zorge: Executive Producer "Professor Creepy's Scream Party"

"A sweet and funny journey through surprise, which is truly in the bag." ——Terence Winkless, Award-winning actor, writer and director (Mighty Morphin Power Rangers, The Howling, The Banana Splits)

"Completely charming and unexpectedly sweet. I loved the relevant message about nonjudgement and finding mutual value in unlikely friendships." —Eva Steortz: Former Vice President of Marketing at Disney, author of From the Out House to the Mouse House. (Originally from Sistersville, West Virginia)

LOVED THIS SMALL STORY WITH A BIG MESSAGE! Having a “hobby that helps people” is an inspiring ideal for kids today, (or for any age)! Growing up in these times cannot be easy, so this book is like a blueprint for at least one small solution. Wonderfully detailed through its drawings and nicely crafted words, it portrays that awkward age when peers can be so judgmental. Surprising to themselves, two outsiders with vast differences find a common bond and discover their humanity by helping their community and in turn, themselves.

Dave, an award winning film and television writer, cartoonist, author, musician, voice actor and freak nerd, has had his writing compared to the likes of Ray Bradbury and David Lynch and his cartoon work to that of Charles Schulz, one of Dave’s idols. As senior writer and head of cartoons at National Lampoon, he put out two best-selling cartoon collections while handling writing and cartooning for the flagship magazine. He was also involved with Comic Relief. His early work includes art and design for Nickelodeon’s “Double Dare” and MTV and art for Tim Allen and Robert Wuhl’s HBO specials. As a cartoonist and writer for Tiger Beat’s Superteen Magazine he created the popular cartoon Toon Groupies©. Dave is also the creator of the popular Hackidu characters from “Everybody Loves Raymond.”

Dave illustrated the award winning children’s book, The Lemming Shepherds, which is being adapted into a feature film. He also illustrated and helped edit the book Full Frontal Tenudity from famed comedienne Judy Tenuta. Dave’s humor book, Brain Explosion, a collection of his cartoons and writings from his National Lampoon days has become a big seller and is available on Amazon and Barnes and Noble.

His kids TV special, “Professor Creepy’s Scream Party(c),” starring some of horror’s most iconic figures, was one of the most watched specials on Roku for Halloween, 2018. Professor Creepy has secured a deal memo with a national TV network. Dave’s documentary, “From Cheesecake to Cheesecake: The Joy Harmon Story” (WGAw), about the life of 1960s film/TV icon Joy Harmon, has won numerous festival awards around the world.

Taking a break from crazy LA and proving you don’t have to live there to produce on a major level, Dave relocated to historic Sistersville, West Virginia for a gig as a features and investigative reporter for a newspaper. While there, he began producing and hosting a national horror radio show, Cemetery GoGo(c), on WRSG 91.5 FM out of Tyler County, on Dec. 14th, 2019. It has since become one of the most popular shows on the station. True to his book title, Brain Explosion (which has become a permanent part of the West Virginia library system), Dave has not stopped creating. He has begun an audio podcast on Spotify and has several animated and live action series and film projects also in the pipeline.

Dave has worked with legendary bands Cheap Trick and The Dickies and his cartoon work is part of the Charles M. Schulz (Snoopy) museum in Santa Rosa, CA and the Haig Museum of Cartoons in New York. He is the former song writing partner of the late Albert Hague (Fame, How the Grinch Stole Christmas) and is a direct descendent of Vlad the Impaler (inspiration for Dracula). Dave is an avid golfer and athlete and got to coach basketball with legendary UCLA coach Jim Harrick and former LA Lakers and Clippers coach Mike Dunleavy.