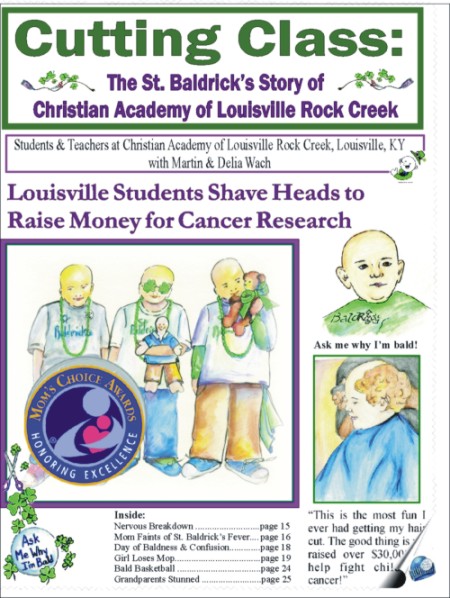 Cutting Class: The St. Baldrick’s Story of Christian Academy of Louisville Rock Creek. It is a story that comes from the hearts of children to help others afflicted with childhood cancer.

Cutting Class: The St. Baldricks Story of Christian Academy of Louisville Rock Creek is a story that comes from the hearts of children to help others afflicted with childhood cancer. These students experienced the devastation of cancer first hand when one of their own was diagnosed with hepatoblastama, a rare childhood cancer. She had chemotherapy treatment and as a result, her hair fell out. Her fellow students and teachers rallied around her by participating in St. Baldricks Day at their school. With a goal of $10,000 to be raised, these energetic and caring children, teachers, and parents raised over $33,000 for research to cure childhood cancers!

When popular children's book authors, Martin & Delia Wach, gave a writing and illustrating workshop as part of the Headline Books School Show Program at Rock Creek Campus in Louisville, KY they became engulfed in the story of love and outreach by the school. The result is a proud collaboration between the students, their teachers, the Wachs and Headline Books. During their school visit, the Wachs wondered why there were so many bald students. After hearing the children s stories, the Wachs approached Principal Marilyn James with the idea of the children writing a book about their experiences. Using the Wachs book, An Adventure in Writing as a guide, the students and the Wachs had a brain storming session and it was decided the story line would be about a newspaper writer who is down on his luck. The students wrote interviews based on their own experiences with St. Baldricks. Delia Bowman Wach, noted artist and illustrator, also worked with the children teaching them how to illustrate their stories for the book. Authoring a book is something these students will never forget. They began their book project in September 2007 and worked diligently through December to complete the project. Now, not only are they in the news...they are in the Library of Congress! The strongest motivation to work on this project is to help raise more awareness and funds for the St. Baldricks Foundation. The school plans to donate 100% of their net income to the St. Baldricks Foundation.

Be the first to review “Cutting Class” Cancel reply

Delia Bowman Wach is a highly acclaimed watercolor and mixed-media artist who has fallen in love with painting Teddy Bears and their friends.  Delia enjoyed placing small animals in many of her earlier works and was told that she seemed to give these creatures a living personality.  This ability has made her one of today’s best known children’s book illustrators.
In the early 1990’s Martin Wach went to Suriname, South America, for business and by chance met a Maroon Medicine Man.  This led to a trip into the rain forest and meetings with the chiefs of the four Maroon Indian Tribes to discuss their need to create trade and commerce with America.  Martin suggested the creation of sustainable micro-businesses as a solution to creating new trade relationships.  The projects included the search for new medicines, aviculture, butterfly farming, poison dart frog research and eco-tourism.  While Martin was working with the Maroons, Delia was creating a cast of characters who live in the rain forest, out of…TEDDY BEARS!!!
Delia created the characters that would tell the story of the importance of saving our rain forests and Martin helped to write the story. Teddy Bear Guardians of the Rain Forest was born.
Martin and Delia have now spoken to over 680 schools in West Virginia, Kentucky, Pennsylvania, Maryland, North Carolina, Utah, New York, Florida, and Virginia. They have spoken to an average of 2500 students per week primarily in elementary schools. They have also spoken to middle, high school, and college students as well as adult audiences. Delia has become so successful she now spends full time at the drawing board creating new characters, but will be rejoining Martin for especially interesting invitations.
In elementary schools, Martin begins with a 45 minute lecture. Martin tells amazing stories about the Rain Forest – Never, Never, Never Sit on a Tarantula, and Delia explains the art of illustration with From a Box of Crayons to a Digital Universe. She demonstrates how an idea in the artist’s head appears on paper.

An Adventure in Writing

Teddy Bear Helps on the Farm

The Cat Has Class!

Veterans Reign in Their Own Parade