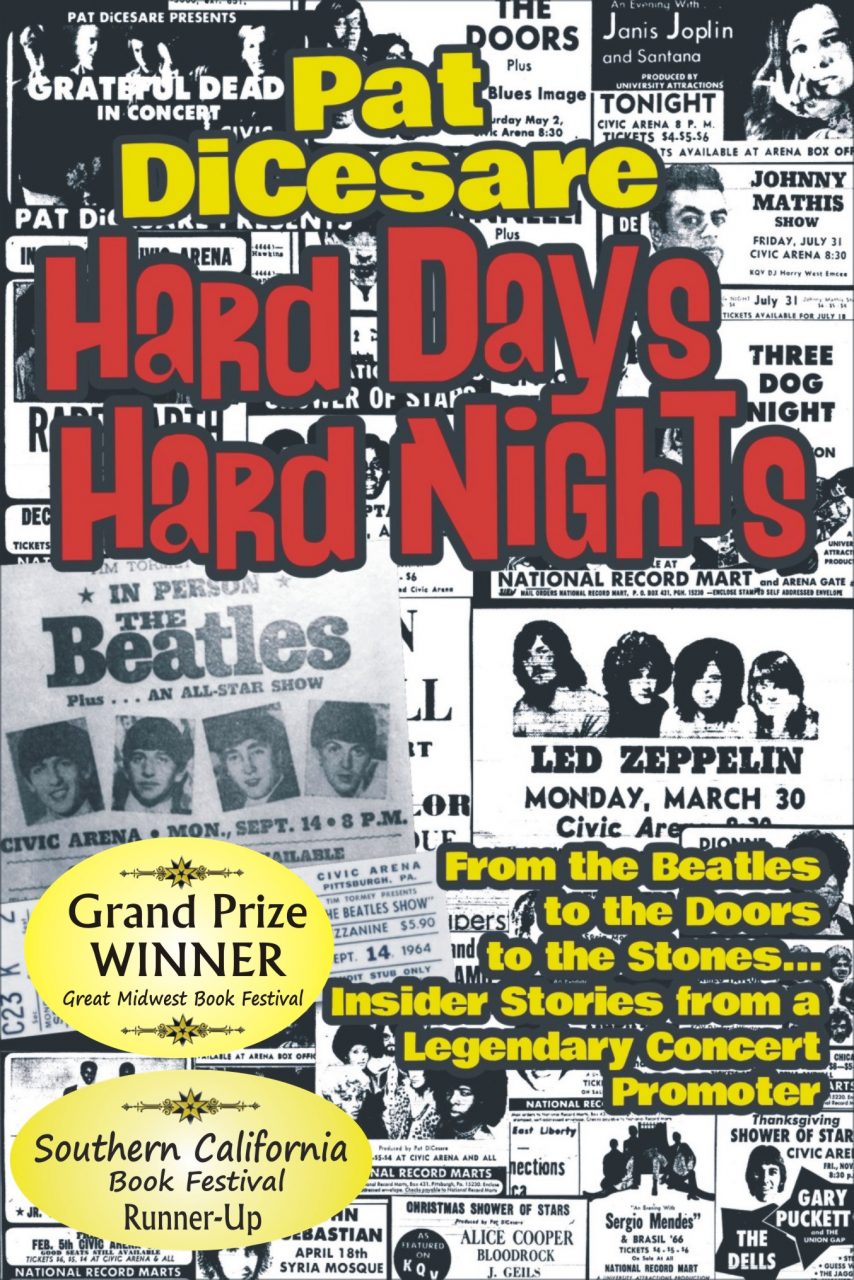 CHICAGO_ An illuminating backstage pass to some of the greatest concerts ever held is the grand prize winner of the 2014 Great Midwest Book Festival.

CHICAGO_ An illuminating backstage pass to some of the greatest concerts ever held is the grand prize winner of the 2014 Great Midwest Book Festival.

Hard Days, Hard Nights is the fascinating, behind-the-scenes story of the birth and development of modern rock concerts, as told by one of its most illustrious proponents, Pat DiCesare.

For 36 years, starting with his first show in Youngstown, Ohio with the Four Freshman, to his big breakthrough promoting the Beatles concert in Pittsburgh, PA in 1964, through his last major show in 1999, Pat DiCesare ruled the Pittsburgh concert scene. Virtually every major rock and pop act of the area—from the Rolling Stones to Led Zeppelin to Bruce Springsteen—passed through Pittsburgh during these years to perform in concerts produced and promoted by Pat DiCesare.

These are the backstage tales of those shows and how they came to be—the untold story of one of America’s most beloved industries.

The first baseball stadium we ever played was a show promoted by Pat DiCesare. He was one of the only promoters we trusted to do big shows and we were right…through all the craziness…floods…insanity…he gave us and the fans a great night. Thanks, Pat!
—Alice Cooper and Shep Gordon, talent manager

Pat worked with a great era of music, producing all the big shows. Reading his book brings back great memories of happy times from music all over the board.
—Chuck Blasko of the Vogues (original member)

Pat DiCesare was always there in the beginning. He had a creative force that helped so many artists. Thanks for the support and guidance. It was appreciated. Congratulations and Best Wishes for your continued success.
—Lou Christie, singer-songwriter, performer

Pat has 'seen it all' - I remember him so well from the beginning of my career to his amazing success as one of the ‘legends of promotion’ and, a great friend!
—Tommy James, Tommy James and the Shondells

After Pat’s Beatles’ Show, we at KQV hooked up with him and his late partner to present the “KQV Shower of Stars” at Pittsburgh Civic Arena—so many great shows with the contemporary acts of the day! Over the years I was the MC and got to meet all of the luminaries of the music biz. One highlight was riding in a limo with Sonny & Cher to Greater Pitt after their concert. F-Bombs were flying in both of their tirades toward each other. Pat is a true show biz legend before my eyes and ears!
—Charles Brinkman, Popular Top 40 DJ and Music/Program Director

Pat DiCesare had a front row seat during the birth of the modern concert business. For decades there rarely was a show that passed near Pittsburgh that he didn’t have a hand in. Concert promoters are often participants in amazing events with inside stories and tales of amazement that could never be told publicly if they want to stay in the business. Pat’s now retired and lucky for all of us, he is now free to speak about his Hard Days in the industry.
—Gary Bongiovanni, Editor-In-Chief, Pollstar

DiCesare’s book has the stories you’d expect from a memoir about the legendary days of rock ‘n’ roll, from a madcap night with Sly Stallone to a rollicking, but tense, Janis Joplin performance in Pittsburgh. Along the way, DiCesare teaches the reader the intricacies of show business and about the complicated relationship promoters share with agents. —Joe Reinartz, News Editor, Pollstar

Hard Days Hard Nights by Patrick J. DiCesare is the story of the birth of the rock ’n roll concert business in Pittsburgh. The book begins with Pat's rather humble beginnings, migrating from Italy in 1920, and dwells on his childhood, earning nickels by delivering newspapers and learning music on a second hand bass. Soon he starts playing, joining a newly opened nightclub, and is eventually offered a position as the head busboy. The author describes arranging a Beatles’ show, the sensation of the times, with great difficulty, only to find himself drafted, and every month collecting a part of his share of the show’s profit (a hundred dollars) and feeling like the highest paid soldier in the US Army, as well as hobnobbing with bigger names like Jim Morrison, Led Zeppelin or Aerosmith, and conducting his own concerts and shows.

Hard Days Hard Nights by Patrick J. DiCesare is an authentic report of the early days of rock, with Pat being a pioneer of great repute, an entrepreneur and rock concert promoter. In these pages we can feel the trials and tribulations Pat faced in his early days, and how his father’s implicit faith in him by advancing 5000 dollars through a lien on the house, and other motivating factors, made him the highest earning concert promoter in the USA. Deeply inspiring, this book chronicles all the efforts that went unseen during the latter half of the 20th century of the music industry in general, and of his hometown Pittsburgh in particular. —Roy T. James for Readers' Favorite

Pat DiCesare is widely considered to be one the fathers of the rock and roll concert business, not only in Pittsburgh, but nationwide. After an illustrious career spanning five decades he retired in 1999 to his home in Greensburg, Pennsylvania with his wife, Kathy, and they have three sons. Pat now makes numerous public speaking engagements and writes for various music and business publications. Hard Days Hard Nights is his first book.