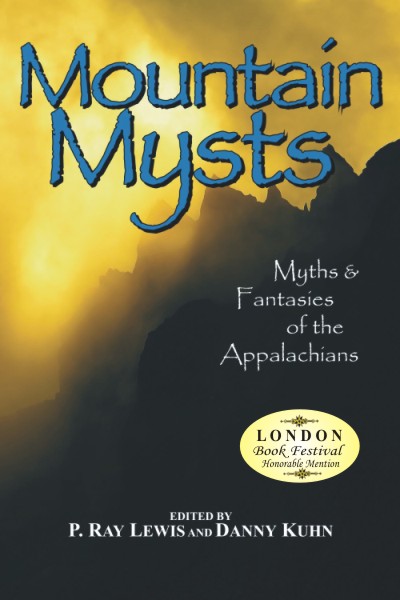 Myths and Fantasies of the Appalachians

The ancient Appalachian Mountains offer panoramic views on a clear day. Their rugged beauty highlights simple, heartwarming stories of hearth and home. But then, the Mysts roll in…

These sixteen stories cover the breadth of central Appalachian fantasy and mythology, from modern day fables to ancient creatures, laugh-out-loud teenage hijinks to 19th-century mysteries that refuse to remain unsolved. There are Ghent-le Giants and coal mining dwarves, confused cemetery flower deliveries and slick-haired evangelists, all adding to the lore of the region.

Mountain Mysts is a marvelous tribute to the depth of talent and wonder of the Mountain State! Its history, myths, legends, and lore are spun beautifully throughout this eclectic gathering of short stories by these wonderfully talented writers--many of whom hail from West Virginia. Some stories will touch your heart, some will tingle your spine, others will tickle your funny bone. But all will be the reader's delight as they travel the variety of journeys these gifted writers guide us through.           —Joyce DeWitt, actress

Through evocative tales that bring new dimensions to familiar locations, landmarks, and legends, Mountain Mysts illustrates the depth of the Appalachian imagination.

Lose yourself in tales from the mountain range where ghosts, wild creatures, and deathly demons lurk about. The Mountain Mysts anthology will bring you upon many strange and dangerous adventures, through the past and back into the present.    —Eliza Tilton, author of Broken Forest

Appalachia. Four syllables that conjure up an endless palette of imagery. At once both pastoral and primal, this rugged range has been a silent sentry to events told and unknown for countless of ages. Mountain Mysts presents a collection of eerie and expertly woven tales that allow the reader to peer beyond the rolling springtime meadows deep down into the shadowy crags that shelter the region's forlorn framework.—Argyle Goolsby of Argyle Goolsby and The Roving Midnight, formerly of Blitzkid

Jordan Elizabeth Mierek is the author of Escape from Witchwood Hollow and Treasure Darkly, Curiosity Quills Press. She is a contributing author to numerous anthologies and a complete list can be found on her website, JordanElizabethMierek.com.

Jack Deskins has lived the better part of his life in southern West Virginia and spends most of the day thinking about creepy things. He now resides with his family in Charleston and plays music with his horror punk band, The Big Bad.

Joan O. Scharf, imaginative writer of gritty short stories, was born in the farm country of the Catskill Mountains. Her books include: Hanging on a Twisted Line, Valentine Tales, and Dark of the Island

As a professional hydrologist, Lee Keene views fiction as a welcome break from the technical manuals that usually fill his day. His yet-untitled new collection of short works, in the experimental form he calls "flash flood fiction," is pending release.

Douglas O'Hara relocated from Appalachia to live in Arizona and is quite happy with the "lack of weather." When he is not working, he and his wife spend their time catering to the every whim of their three canine companions.

P. Ray Lewis, former social worker and federal political liaison turned high school science teacher, has worked with both the mentally ill and a number of top political leaders serving in Congress. Lewis recounts his personal experiences in his writing as well as the humor of raising four adopted children.

T. Allen Winn's published fiction includes the Detective Trudy Wagner Series, Road Rage, North of the Border, Dark Thirty and others. He is a homegrown southerner from the Palmetto State, presently residing on the South Carolina Grand Stand.

Jonetta Bennett's ancestors were early settlers in southern West Virginia, but her genealogical research reveals they once lived in Salem, Massachusetts. That discovery made understanding her family much easier. She now splits her time on a north-south gradient.

Kent L. Reed, father of three, lives in a log cabin near Charleston, West Virginia. He currently works as a network design engineer but hopes to be a writer when he grows up.

Livingston Grooms is a Logan County, West Virginia, native and a purveyor of old books and lover of all things macabre. He once went on a date with Mamie Thurman on a bet.

Ryan Smith is a young writer (read in the wishful thinking sense) who lives in the coalfields of West Virginia.

Avid reader and lifelong science fiction fan, TR Sullivan, is a native West Virginian who now lives in Pulaski, VA with his wife.

Juanita Richmond lives on a small farm in Southern West Virginia, where life has provided her with many different job titles. In her spare time, she likes to be creative.

Be the first to review “Mountain Mysts” Cancel reply