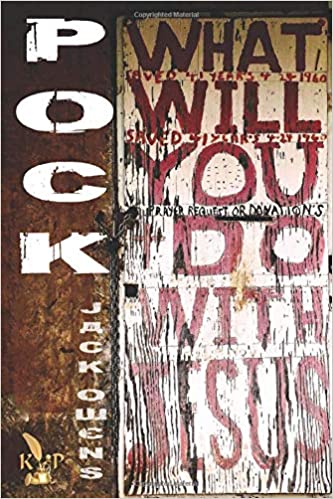 Pock Trilogy – What Will You Do With Jesus

Zoom Into Books Author
In this satirical dark comedy of vengeance, Pock is an intellectual who talks to Jesus and to flowers, and they talk back.

Zoom Into Books Author
In this satirical dark comedy of vengeance, Pock is an intellectual who talks to Jesus and to flowers, and they talk back. Facially disfigured and severely disabled since childhood, Pock is released from an Alabama prison after serving every second of a thirteen year sentence for scalping a man who mocked his appearance. Obsessed with revenge against the people who sent him to prison, Pock slowly targets them from the quiet sanctuary of his garden. Two Birmingham cops track a serial killer, not knowing until it's too late that Pock is their man, and that he is coming for them with Jesus at this side.

Jack Owens grew up in the coal fields of southern West Virginia and in the Philadelphia suburb of West Chester, Pennsylvania. He is a graduate of American University (BA 1966) and the University of Alabama School of Law (JD 1969). He entered on duty as a Special Agent with the FBI, June 23, 1969, when he had hair and two good good knees. His first office of assignment was Denver, 1969-1970, followed by Birmingham, 1970, until he retired, August 31, 1999. He served on the first SWAT team in Alabama, and worked investigations involving bank robberies, kidnappings, fugitive matters, foreign counterintelligence, terrorism, and the recruitment of women and minorities into the Bureau. He was the coordinator of the physical fitness program for agents in Birmingham. Owens worked undercover for four years against hostile intelligence services during the Cold War.

His memoir of three decades in the trenches of the FBI, “Don’t Shoot! We’re Republicans!” was published August 15, 2009. His first novel, “Watchman, JFK’s Last Ride”, will be published mid-year 2013 by Keith Publications.  Jack is currently working on “Pock Series,” a three-novel series of dark comedies about a serial killer and law enforcement in Alabama. Owens, is an avid storyteller wherever invited to speak, laces his tales of murder and mayhem with wry humor. A former CBS TV’s “Big Brother Owens is the father of six and the grandfather of eleven. He and his wife Pat reside in Birmingham on Red Mountain.

Pock Trilogy – Give Them Over To Death