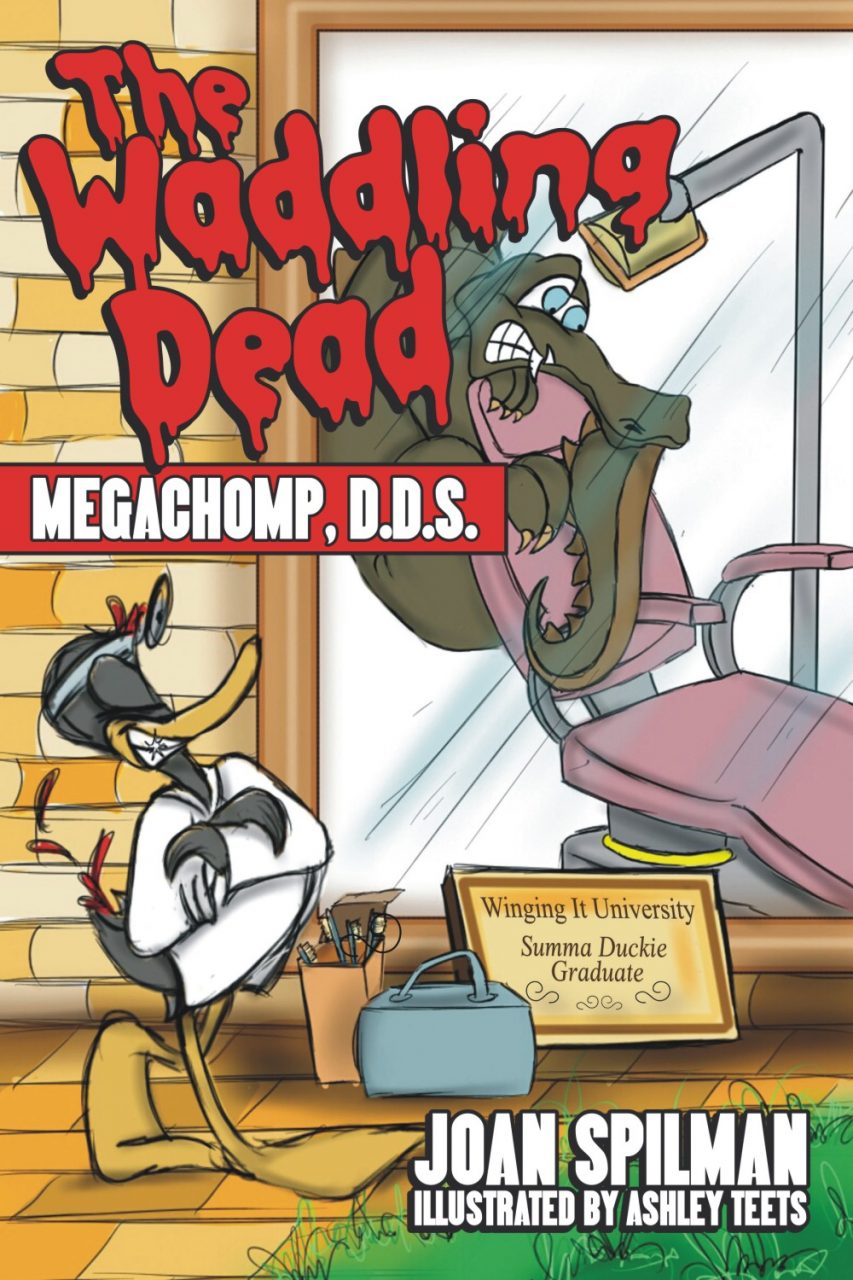 Second in the Waddling Dead series by Joan Spilman, MegaChomp, D.D.S. continues the saga of the zombie ducklings.

Second in the Waddling Dead series by Joan Spilman, MegaChomp, D.D.S. continues the saga of the zombie ducklings. Each was born with a special gift and MegaChomp was born with teeth! That’s right, a full set of chompers, glistening white and perfectly aligned. Will he answer his higher call and become a dentist? Will he tackle Crunch the Crocodile, the dreaded enemy who lives in the castle moat? Come join the fun that lurks in the Kingdom of Waddle.

"My Kindergarten students were captivated by the humorous ducklings and their mega adventures. Their silly antics had them laughing in stitches and kept them actively engaged the whole time!"

"This is a book teachers will love, highly entertaining and full of facts."

An exceptionally creative story that will maintain a student's focus and that of adults also. The illustrations are perfect and I so love the eccentric characters.

Imagine being royalty and having twelve children who are all zombies! That’s exactly what happened to King and Queen Duckworthy. In this second volume of the Waddling Dead, John Duckworthy decides to become a dentist. His zombie mother does not approve but finally relents and allows John (whom she named Megachomp because of his beautiful set of teeth) to enroll in an on-line dental school. He graduates in time for his stay with his royal parents. On his way to the castle, he sees a great opportunity to use his new-found skills. Unfortunately, he is prevented from helping the patient and finds himself in the predicament of making a promise to his royal father and mother that means he cannot help this unusual patient who needs his skills so badly. But patient and dentist along with a few friends find a way for Megachomp D.D.S. to keep his promise to his parents and use his dental skills at the same time.

Joan Spilman’s The Waddling Dead is a “duck soup” of a book. It has a big batch of comic ingredients that give it a delightful flavor. Among them is a cast of hilarious creatures that include a sick crock who can’t crunch, some acrobatic eels, and a duck dentist whose toothy skills save future generations of Waddledom ducks from an untimely demise. The plot jumps from one tasty bit of suspense to another and from beginning to end the scenes are souped up by a zany mixture of duck dialogue, fun words to learn, and the author’s droll wit and wisdom. Yes—The Waddling Dead is for more than those who waddle. It’s written for children and adults of all ages, but especially for those who—no matter what age they are—have stayed young at heart.

—Llewellyn McKernan, author of Pencil Memory and The Sound of One Tree Falling

Be the first to review “The Waddling Dead: Megachomp, D.D.S.” Cancel reply

Joan Spilman has an MFA in Creative Writing from Wichita State University where she was awarded the fellowship. She has published in literary journals such as “The Laurel Review,” “Short Story International,” “Willow Springs” and many others. Her awards include the John Maier Award from Marshall University, the George Garrett Prize for Best Prose from West Washington University, and a PEN Syndicated Fiction Award. She is also the author of a YA novel entitled Sansablatt Head which received a five star review from Kirkus and was called “. . . a masterfully weird adventure, likely to leave fantasy lovers in awe.” Joan has owned one duck, Digger, who now resides at the Blenko Glass Factory Pond for retired or ill-tempered ducks.