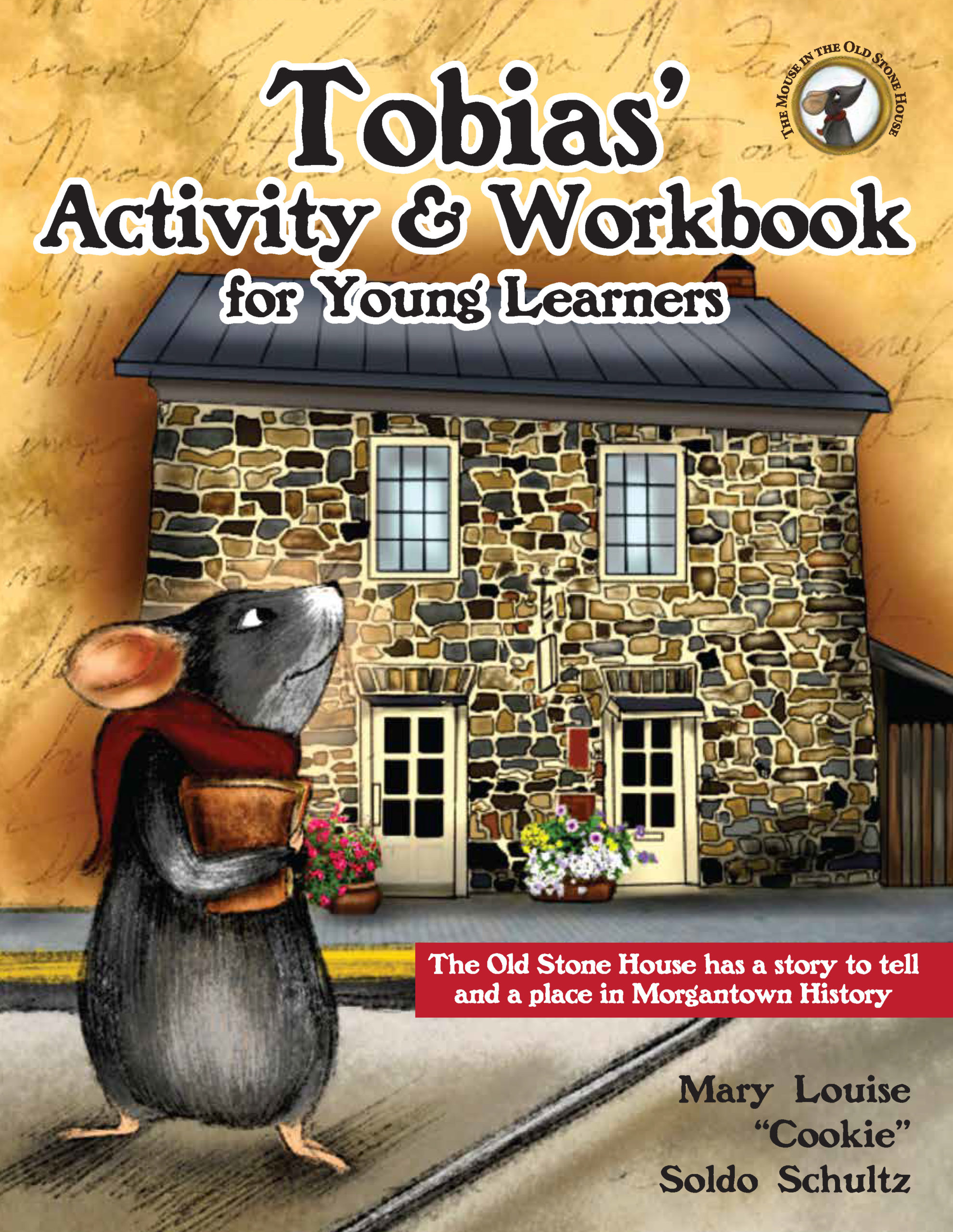 Perfect companion workbook to Tobias: The Mouse in Old Stone House and Tobias: Tales From the Past at the Old Stone House! The friendship between Tobias and Sammy reveals the rich history of this Revolutionary Era landmark in Morgantown, WV.

This Activity Book opens additional paths of understanding to adults and young learners. It accompanies the series of books in which Tobias weaves the story of his ancestors with the historical facts associated with the growth of this frontier region. Whenever you see Tobias holding his monocle, this indicates a place where a discussion between a young learner and an adult may be appropriate.

The ancestors of Tobias lived in a world very different from ours today. When the early settlers arrived in this part of Western Virginia, they found that the Native Americans were living in a land that was densely forested and mountainous. Rivers, streams and footpaths provided access into this western frontier. Isolated settlements began to form along with those of the natives and gradually towns would begin to flourish. The map on the following page shows where the settlers had gathered by 1776 and also indicates the location where a place called Morgan’s Town would be established in 1785.

Mary Louise “Cookie” Soldo Schultz, recently retired from the Honors College at West Virginia University, has enjoyed more than a forty-year career in primary, secondary, and higher education. She is the recipient of numerous teaching awards and has received prestigious grants, including fellowships from the National Endowment for the Humanities, the West Virginia Humanities Council and a Quarry Farm Fellowship from the Center for Mark Twain Studies at Elmira College. Cookie holds undergraduate and graduate degrees in French Language and Literature and Art History. Her publications include a chapter entitled “Studies in France” in Blanche Lazzell: The Life and Work of an American Modernist (2004), the essay on Blanche Lazzell in the West Virginia Encyclopedia (2006) and a children’s book entitled Tobias: The Mouse in the Old Stone House (2015) which is the first in this series and has received an honorable mention in the London Book Festival and a Mom’s Choice Gold Award. She co-authored, with her husband Bernie, the Instructor’s Manual for the sixth edition of H.W. Janson’s History of Art (2001) and a chapter entitled “Cass Gilbert and the Classical Tradition” in Cass Gilbert’s West Virginia State Capital (2014). Cookie authored the essay on Blanche Lazzell in Central to Their Lives: Southern Women Artists in the Johnson Collection (2018). Her most recent activity is the co-creation of a podcast on a canto from Dante’s Divine Comedy for the Dante Society of America (2020). Cookie lives in Morgantown with her husband.

Tobias: Tales From the Past at the Old Stone House

Tobias: The Mouse in the Old Stone House