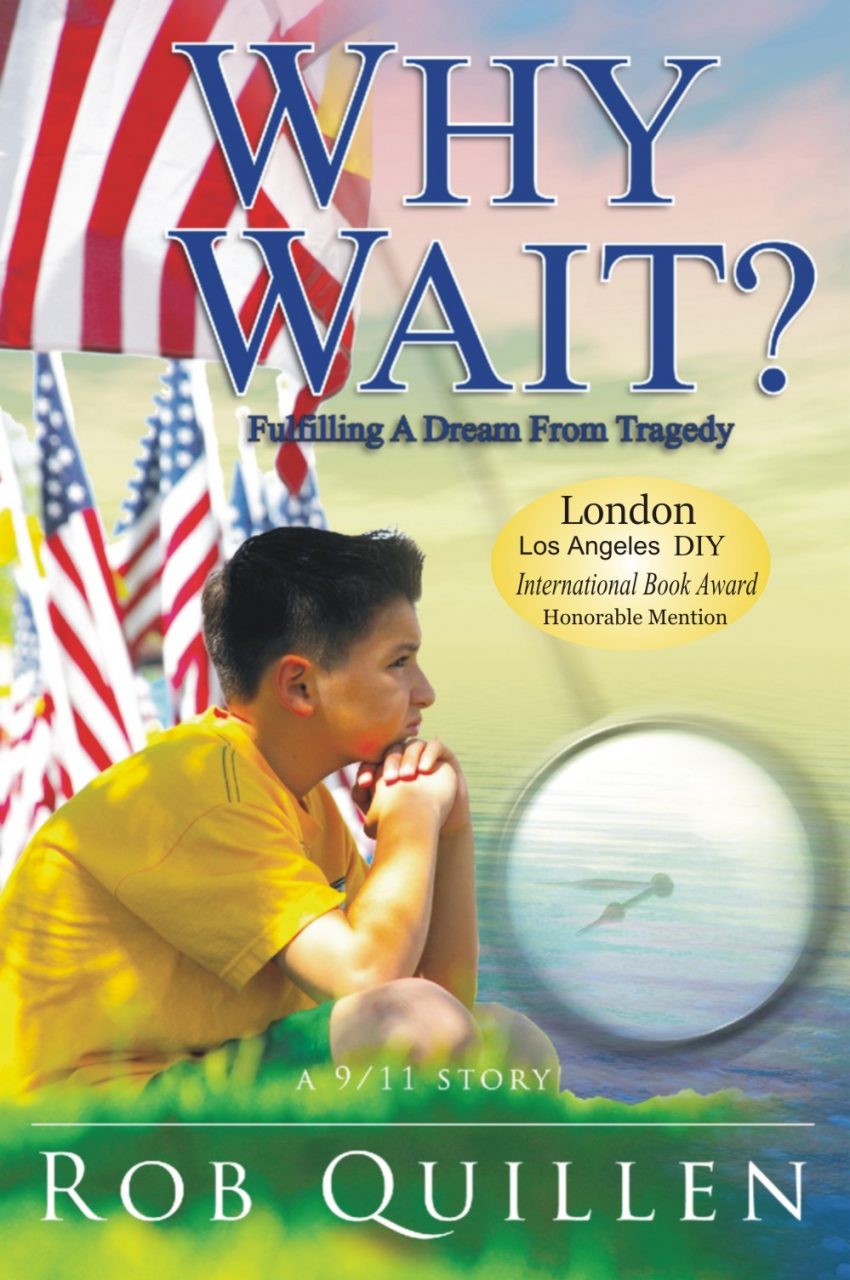 Why Wait? Fulfilling Dreams from Tragedy

A chance meeting on Sept. 10, 2001 started a quest to help others by author Rob Quillen that would change his life forever. Ten years later his personal 9/11 story of fulfilling a young boy's dream from tragedy is told in his book, Why Wait?.

A chance meeting on Sept. 10, 2001 started a quest to help others by author Rob Quillen that would change his life forever. Ten years later his personal 9/11 story of fulfilling a young boy's dream from tragedy is told in his book, Why Wait?.

On a flight from Denver to Newark, N.J, author Rob Quillen made the acquaintance of Captain Jason Dahl, who the next day would be piloting United Airlines Flight 93 when it crashed in a field in Shanksville, Pa., during the infamous 9/11 terror attacks. During the flight, without an inkling of the tragedy that was to come, the two men became close friends, talking about dreams and what the future might hold. Quillen was wearing a Jeff Gordon polo shirt that sparked a conversation about NASCAR.

Dahl and his son, Matt, dreamed of going to a NASCAR race and meeting their hero, driver Jeff Gordon. Quillen had two extra tickets for the race at Kansas Speedway later that month. He couldn't arrange a meeting with Gordon, but promised to get the Dahls in to see that race.

When Captain Dahl died the next day, Quillen resolved to make good on his promise and take Matt to that race. With the help of many people, including NASCAR, ESPN and NBC television, he got Matt Dahl to the race as Gordon's special guest.

Quillen tells the story in Why Wait?. "The book is about a simple life lesson for everyone: Why do we wait to help dreams for other people come true before it is too late?" Quillen said. "All of us have the amazing power to help dreams come true for someone else - you just have to make the decision to do it. It's never too late for an act of kindness.

Be the first to review “Why Wait? Fulfilling Dreams from Tragedy” Cancel reply

Rob Quillen started writing for an unofficial Jeff Gordon website and in 2009 wrote for RaceJournalOnline, a feeder website for Jayski.com and ESPN.com. His 9/11 story has appeared in Fields of Thunder: The Story of the Kansas Speedway and Chicken Soup for the NASCAR Soul. His chance encounter with pilot Jason Dahl, whose plane crashed in Shanksville, Pennsylvania on 9/11, started the author on a journey of not only self-awareness—but also a quest to fulfill one boy’s dream. With the help of many friends including NASCAR and ESPN, he was able to bring Jason Dahl’s son, Matt, to his first NASCAR race and meet one of his idols, Jeff Gordon. Quillen has been interviewed on The Today Show on NBC, The NBC Nightly News with Tom Brokaw, ABC National Radio Interview, NBC’s Pre-race interview before the 9/29/01 Kansas race as well as several dozen local media interviews on all major networks.

In the months and years following 9/11, he’s been on the lecture circuit giving inspirational speeches on various subjects surrounding 9/11—particularly the message of how you can help others fulfill their dreams. In addition to writing and speaking, he is a board member for The Jason Dahl Scholarship Foundation. This is a foundation created by Sandy Dahl, Jason’s widow to raise money for high school seniors wanting to go to college to obtain their aviation degree. A percent of the proceeds from sales and speaking tour appearances go directly to the foundation. Rob lives with his family in Nebraska.