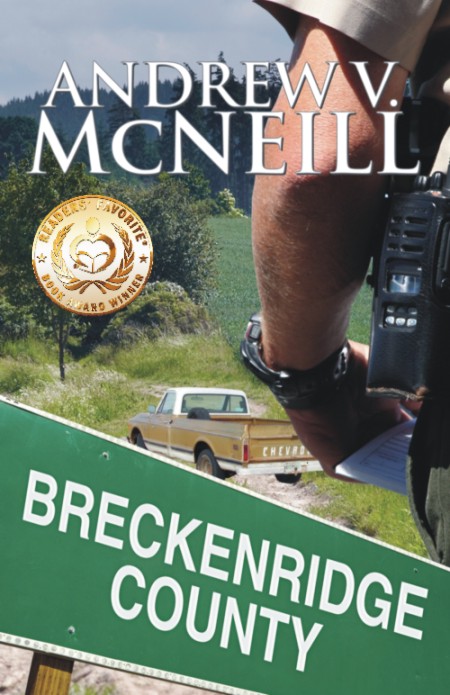 Gold Winner Reader's Favorite Book Awards Best Realistic Fiction
Honorable Mention DIY Book Festival Best General Fiction Deputy Jesse Pace returned home to be close to family, win back the affection of his high school sweetheart, and do some good in his community. Little does Jesse know, Breckenridge County has become an epicenter in the “War on Drugs.” Methamphetamine is strangling the small town of Argyles Landing and powerful forces are aligned to build a domestic drug cartel with the intent of extending its reach throughout the United States.

Breckenridge County is a well-researched, fast moving portrayal of the dangerous impacts and gritty elements of the meth epidemic taken from today’s headlines. It brings to light the malignancies simmering below the surface of almost every American community, large and small.

Jesse Pace is on the front lines, battling each day to keep children and decent folks safe from this scourge. Given the stealth nature and combined muscle of the forces united against him—the question may be—Will one man fighting this fight be enough?

"This eye opening book is well-researched. The plot is sadly realistic. The author successfully captures the essence of the rural southern culture.  This book has it all: conspiracy, corruption, drugs, suspense, racism, perverts, and romance." Anne B. for Readers Favorite

"McNeill weaves a fast-paced modern morality play. A local boy turned deputy sheriff does bloddy battle with an evil axis behind a ripped from the headlines methamphetamine menace." John David Dyche, columnist for the Courier-Journal

In his ambitious first work, Andrew McNeill has called attention to an important and under-reported social issue--the drug epidemic in rural America--in a compelling and dramatic way. The story is fictional, yet some variation of it is unfolding in small towns at this very moment. Kudos to McNeill at the start of a promising writing career. --Billy Reed, Award-Winning Author of The Monarchs

About the Author
Andrew V. McNeill is a public policy research consultant. Criminal justice and the War on Drugs have been within his research portfolio since 2003. He lives in Louisville, Kentucky.

Be the first to review “Breckenridge County” Cancel reply