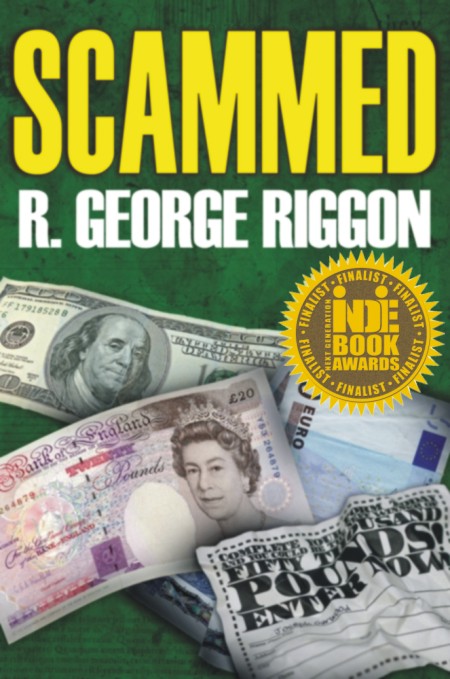 Beware of that grocery store, mall, or event lottery! Scammed shows how much it can cost to “win.”

Joseph entered a competition at his local supermarket and did not expect to win the fifty thousand pound prize. But this time, his luck would change in a way that was beyond his wildest dreams. His name had been emailed nearly five thousand miles across the world and ended up in the hands of a skillful scammer. Before he and his family realised what was happening, a much higher price was paid for that long awaited winning cheque.

Refreshing, witty, yet thought-provoking at the same time, R. George Riggon has broken the mould with Scammed and his wry look at sweepstake culture. It s a fast-paced story which crisscrosses between sun-kissed Negril Resort in Jamaica to industrial Birmingham, England s second city. Lives are devastated when the temptation of making a fast-buck proves too hard for some to pass up when a chance encounter between two strangers leads to the murky world of bogus prize-draw competitions and international telephone sales calling. The life savings of a hard working grandfather are stolen and death lurks for others as the story takes a sinister twist. It's well worth the read; dreams do sometimes come true but look out for the tell-tale warning signs. If it sounds too good to be true, then it probably is and most importantly, don t get scammed. --Deborah Hardiman, journalist West Midlands, England

About the Author
After living and working in England for most of his life R. George Riggon returned to a vibrant and self-assured Jamaica in 2009. The music was energetic and flags were on high parade in honour of the triumphant return of their Beijing Olympians and World Champions. Amidst the sweet jubilation, he entered and won a low-keyed annual Hanover Parish reading competition in western Jamaica under the banner of the Jamaica Library Service. As part of the competition Riggon read some entertaining books each depicting ordinary people doing extraordinary things. It inspired him to pick up his pen and begin writing about some of the experiences that he too had become exposed to. This work of cultural fiction is his first offering.

Be the first to review “Scammed” Cancel reply