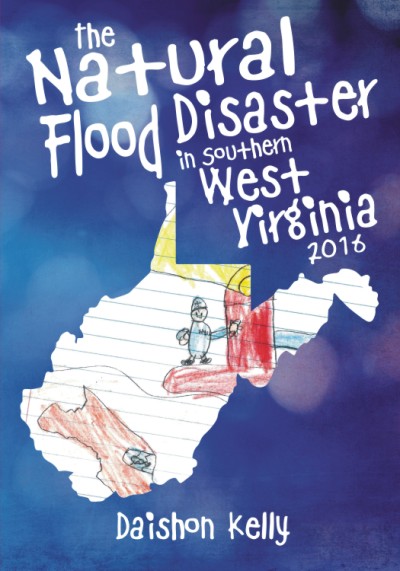 9 year old Daishon Kelly is raising money for flood relief in Southern West Virginia by donating money from sales of his book. There has been an outpouring of support and Daishon is in the forefront–helping others to recover from this terrible disaster.

On June 23, 2016, a flood hit areas of Southern West resulting in 24 deaths. The flooding was the result of 8 to 10 inches of rain falling over a period of 12 hours. According to meteorologists at the National Weather Service, the rainfall qualified as a 1,000 year event for parts of Fayette, Nicholas, and Greenbrier Counties.

In the wake of the floods, West Virginia Governor Earl Ray Tomblin declared a state of emergency for 44 of the state's 55 counties. Flood relief and federal aid came to West Virginia to help those in need and that's why one young boy, Daishon Kelly, wrote this book—so he could help, too.

Daishon Kelly was born and raised in Morgantown WV. He is passionate about writing and wrote his first story when he was five. When he saw the devastation caused by the June flood in Southern West Virginia he wanted to help. Having lost his own father last year, he knew how families felt who were torn apart and wanted to give hope to those who lost everything. He wants to offer encouragement and remind everyone that we can all come together and pick up the pieces no matter how difficult it may be. Daishon has raised funds to help with flood relief and will continue his efforts from sales of his book. He lives in Morgantown with his mother, Melanie Kelly and his sister, Kaylese.