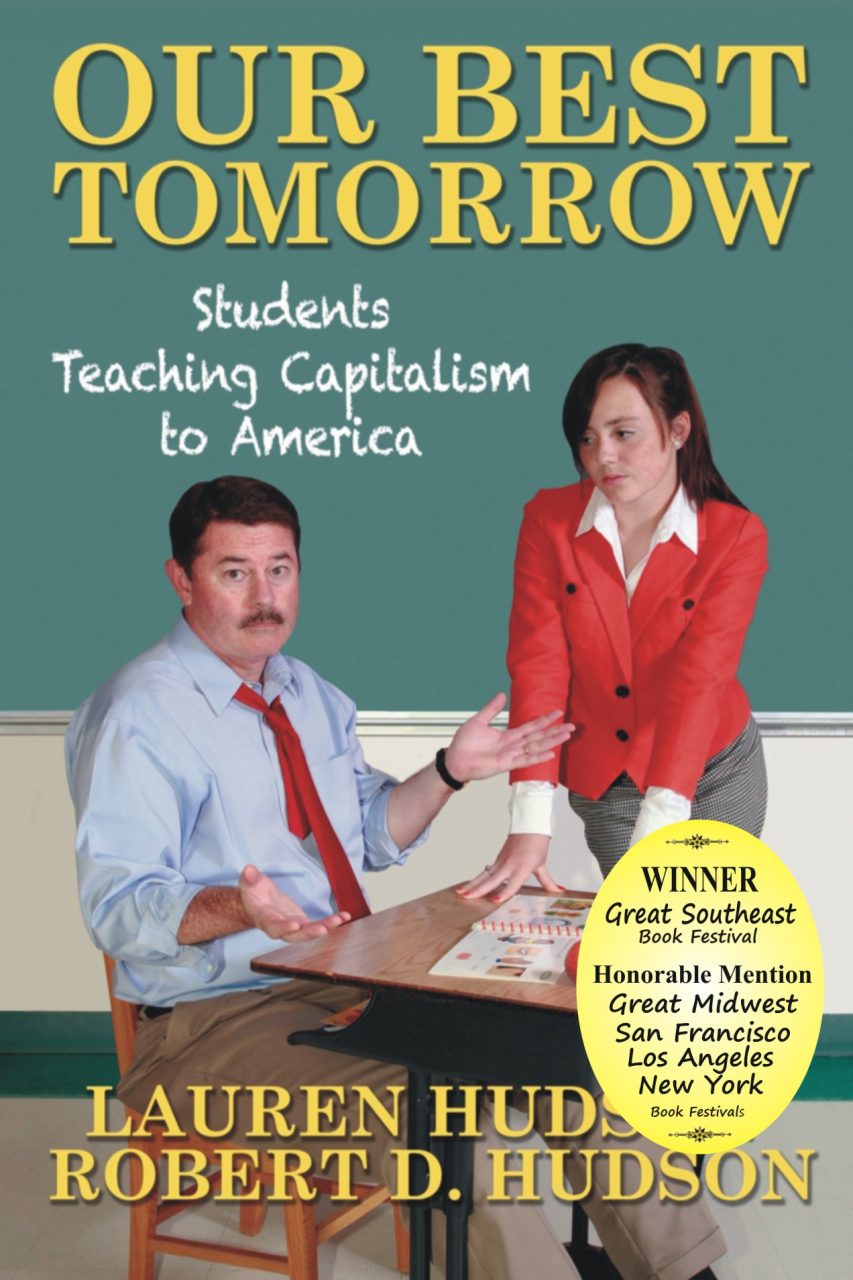 Lauren Hudson steps out of the classroom to give us no-nonsense lesson on making it in America by following the lives of three friends and their climb to success. Her father, Robert Hudson, adds lessons and tips from our history with a clear eye on building the American Dream. Starting young will increase our children's ability to achieve financial independence through education, hard work, and perseverance-lessons and values we know, but sometimes get lost in our ever increasing political environment.

How successful can our youth be in America? If we create the best business climate in the world, there is no limit. Can Isabella, a once poor, unpopular girl, with no friends, someday become a business owner, a Governor, or even President of the United States? In America, anything is possible.

Students who read Our Best Tomorrow will cast aside notions of false utopias to embrace the principles of hard work that made America great. Our Best Tomorrow sets the record straight, through the captivating stories of three childhood friends. Isabella, Jake and Adelaide experience success, setbacks, heartache, and joy as they make their way in the world, striving for American exceptionalism.

Our Best Tomorrow is the student follow-up book to Robert D. Hudson's A Better Tomorrow - Fighting for Capitalism and Jobs in the Heartland. A Better Tomorrow became an Amazon #1 Hot New Release and Bestseller. It received the Silver Medal in the National E-Lit Awards and the New York Book Festival recognized it as one of the nation's best business books in 2013.

What People Say
In "Our Best Tomorrow," Rob and Lauren teach principles which, at times, have been overlooked in public school curricula. The book reminds our youth that in America, with hard work, education, and freedom we can achieve anything. It encourages critical thought about our businesses and government, contributing to a student's solid foundation for life. -Chris McDaniel, Kentucky Senator, President and Owner, McD Concrete

1 review for Our Best Tomorrow

Two-time Independent Author of the Year Lauren Hudson’s Ascension Series has garnered more than a dozen awards nationally and internationally, including Mom’s Choice Gold, Readers’ Favorite, and Book Festival wins in Hollywood, New York, Paris, and London. Lauren is a sophomore at the University of Kentucky, majoring in Neuroscience and Biology as a Singletary Scholar. Her published works include books, articles and columns addressing eclectic subjects, including medicine, fitness, ethics, and business.

Rob is an attorney and owner of the law firm Frost Brown Todd, LLC, representing businesses in the firm’s labor and employment law practice group. Rob has been immersed in his region’s economic development for over two decades. He helped lead Northern Kentucky’s two largest business organizations, as Chair of the Northern Kentucky Chamber of Commerce and the Covington Business Council. He served as President of the Northern Kentucky Society for Human Resources Management, President for Be-Concerned, Inc., President of the University of Kentucky Alumni Association in Greater Cincinnati, and as a Board Member for the Tri-County Economic Development Corporation.

Rob authored A Better Tomorrow – Fighting for Capitalism and Jobs in the Heartland, which chronicled President Obama’s first term in office from the perspective of a common sense business leader. The book became an Amazon #1 Hot New Release for Political Economy Books and an Amazon Bestseller. A Better Tomorrow received the Silver Medal at the 2013 National E-Lit Book Awards. The New York Book Festival selected it as one of 2013’s top business books. Rob has also authored hundreds of pro-business columns for various publications.

A frequent lecturer and trainer on business, legal and leadership topics, Rob has been recognized as a Best Lawyer in America, Kentucky Super Lawyer, Cincy Leading Lawyer, and by Chambers and Partners as the “go to employment lawyer in Northern Kentucky.” He has been inducted into the Taking Care of Business Hall of Fame and is a past recipient of the Area Development District’s Outstanding Community Leadership Award. Rob served as a regular co-host for the television show “Leading Businesses, Leading Communities.” He recently received the Northern Kentucky Frontiersman Award for lifetime achievement in serving businesses.

Rob met his wife-to-be, then Melissa Martin, at the University of Kentucky in 1980. After receiving a B.S. in Accounting with High Distinction, Rob graduated from the University of Kentucky College of Law and moved to Greater Cincinnati. Rob and Melissa reside in Villa Hills, Kentucky with their two children, Robbie (age 17) and, of course, Lauren (age 13). Rob and Robbie coached youth athletics at Lakeside Christian Church for many years, where they taught Kentucky’s two gospels simultaneously – faith and basketball.

It Can Be Done

It Can Be Done (eBook)
Our Best Tomorrow (eBook)
The Ascension

The Deception (eBook)
The Redemption