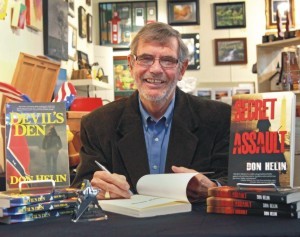 Using his experience from the military, including eight years in the Pentagon, Don Helin’s first thriller, Thy Kingdom Come, was published in 2009. His second, Devil’s Den, was selected as a finalist in the 2013 Indie Book Awards. His latest thriller, Secret Assault, was selected as the best Suspense/Thriller at the 2015 Indie Book Awards. Don is an active member of International Thriller Writers, Military Writers Society of America, Pennwriters, a statewide writers group in Pennsylvania, and is a mentor with the Mystery Writers of America. He makes his home in central Pennsylvania where he is hard at work on his next Zack Kelly thriller, Long Walk Home.