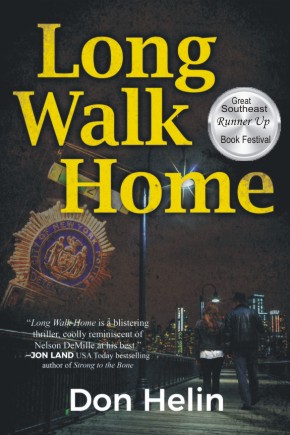 “If you like thrillers with plenty of action, a strong cast of good and bad guys, corruption, and mayhem, you’ll love Long Walk Home. Don Helin will put you on an adrenaline ride of action and suspense.”  —Joseph Badal, Amazon #1 Best Selling Author of Sins of the Fathers

A trip to New York City, for Colonel Zack Kelly, is more than an opportunity to bond with his daughter, Laura.  It's a chance to find out what happened to his father, an NYPD cop shot down and killed by drug dealers, then branded a dirty cop some thirty years before. Someone doesn't want Zack to learn the truth of his father's past and Zack suspects the corruption his father was investigating may have reached as high as the New York City Police Commissioner. Zack's long-time friend is visiting New York from her home in Ireland and accompanies Zack to see the leader of the New York organized crime family, who may be able to provide information about his father.

A hijacking aboard the Staten Island Ferry and a plot by a group of ex-military called the Forgotten Warriors to take over the Alamo in San Antonio both seem to be intertwined, leading Zack on the longest walk of his life. And it may not even lead him home.

"Long Walk Home is a bruising and blistering thriller, coolly reminiscent of Nelson DeMille at his best. Don Helin's emotionally-wrought, angst-riddled, morality play is ever true to its title, making it a wondrous and tortuous tale of one man's descent to hell and heroic climb out of it. A mystery of rare depth, pathos, and conviction."—Jon Land, USA Today bestselling author of Strong to the Bone

"If you like thrillers with plenty of action, a strong cast of good and bad guys, corruption, and mayhem, you'll love Long Walk Home. Don Helin will put you on an adrenaline ride of action and suspense."  --Joseph Badal, Amazon #1 Best Selling Author of Sins of the Fathers

During his time in the military, Don Helin served at a number of stateside posts as well as overseas in Vietnam and Germany. He is the author of six thrillers that draw from his military experience, including three tours in the Pentagon. He writes for TheBurg, a community magazine based in Harrisburg.
His novel, Secret Assault, was selected as the Best Suspense/Thriller at the 2015 Indie Book Awards. His novel, Long Walk Home, received a Five Star review at Readers Favorite Awards.  You can reach Don at: www.donhelin.com.

Twins
Voices From The Pandemic