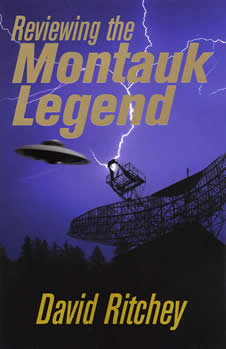 The Legend has to do with UFOs, invisibility, time travel, teleportation, mind control, weather control, conspiracies, and other similarly esoteric subjects.

Fact can be stranger than fiction because fiction needs to stay within the realm of what is possible; fact does not.  The Montauk Legend, which has to do with UFOs, invisibility, time travel, teleportation, mind control, weather control, conspiracies, and other similarly esoteric subjects, is sufficiently bizarre that it seems to lie outside the realm of possibilities, and therefore it just might be fact.

Intrigued, and overriding my natural skepticism, I decided to dig as deeply as possible into the subject matter in the hope of determining what elements, if any, were factually accurate.  Since the extant literature made its authors appear to be raving madmen, I decided to take a different approach to my research, and enlisted the aid of a psychic colleague, who knew nothing about the Legend, to help me determine what “really” happened.  While psychic readings can hardly be considered the best source of factual data, I reasoned that if what she had to say dovetailed closely with what was in the literature, the paralleling of information from two entirely disparate sources might go a long way toward establishing credibility.

What we discovered was absolutely fascinating, and our findings are revealed in this book.

Be the first to review “Reviewing the Montauk Legend” Cancel reply